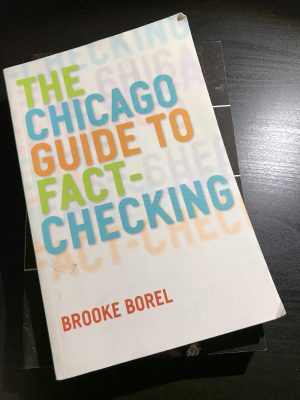 Communicating plant science is one of the core missions of AoB Blog. How do you know what you read here is factual and evidence-based? In short, we cite primary literature and talk to experts. We are also open to corrections and *constructive* criticism from readers. We’re human too, after all. Even plants, as fantastic and sensitive as they are, can get critical thinking wrong.

Communicating science may also mean talking to the press and media outlets. This can be a fraught relationship because science tends to be incremental and slow-moving, while news is literally noteworthy and relevant to that day’s audience. Scientists are also often be advocates for science while that is not a journalist’s job. These communication styles do differ in some important ways. However, both share a point of view of skepticism, finding the crux of a story or scientific question, and tenaciously following curiosity.

A book that can help both scientists and journalists (we address mostly the former here at AoB Blog) is Brooke Borel’s The Chicago Guide to Fact-Checking. It’s a slim book with dense content. It goes through what journalists, writers, and other publications do to fact-check stories they publish. It’s looking at how journalists get peer-reviewed. Often it’s the case that a journalist is a self-taught fact-checker serving as their own verifier, which isn’t ideal. Borel has some ideas for that too. This may be relevant to science bloggers/volunteer communicators as they likely are their own fact-checkers.

“While the book is geared towards journalists, freelancers, journalism students, professional fact-checkers, and others who work in nonfiction writing, it gives any audience insight to the media world. For scientists – especially those doing media interviews – it will help show how journalists and fact-checkers think.” – Brooke Borel

Through knowing how journalists put stories together, scientists can better understand what is salient to a journalist when they get in touch. If they work for a magazine or radio show, the fact-checker there will likely get back in touch to verify what the journalist found. They’ll identify any gaps or unsupported facts they can and communicate to the journalist and editor whether they got it right the first time round or the story needs revision.

Borel’s fact-check guide includes an interactive component so readers can learn to have a more critical eye and source facts. One activity uses the book itself, asking readers to go find facts to check in a chapter (it’s an exercise that takes longer than one might think). She’s careful to point out to not actually go out and contact someone or bother them when an exercise suggests doing things out in the wider world, but to privately note what you would ask someone if you were a fact-checker. She also goes through fact-checking examples and interviews fact-checkers for various outlets, largely magazines.

The first few chapters are broken up into three major questions journalists seek answers to: why, what, and how to fact check, respectively. The next three chapters take a deeper dive into checking and using different kinds of media/stories, sourcing, and record-keeping. The final chapter consists of a few case stories to fact-check (there are several activities spread throughout the book as well in call out boxes).

For a short book, it has immense value in an era where having sources and knowing how to find, cite, and keep track of them is more critical than ever in communicating science and working with journalists. For readers wanting to develop fact-checking as a skill, this book is a great starting point, BYDHTTMWFI*.

*For those that know the American show Reading Rainbow, this is an acronym of host Levar Burton’s “But you Don’t Have to Take My Word For It!”, suggesting kids could go find and read a book they saw on the show for themselves.

Ian (@IHStreet on Twitter) is a plant scientist, science writer who blogs at The Quiet Branches. He is also a cohost of The Recovering Academic Podcast, and an Associate Editor at The POSTDOCket, the newsletter of the National Postdoc Association, and most recently, a Virtual Lab Manager at HappiLabs. email: resources@botany.one