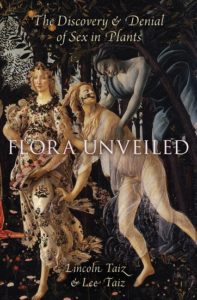 Living in the 21st century with easy access to knowledge – and its various fake versions – on the internet and our seeming sophistication and all-knowingness, it’s hard to appreciate times gone by when we humans knew so much less. Take for instance the notion that plants engage in sexual reproduction. This truth seems so commonplace and widely known nowadays that to imagine a time when this was quite a heretical concept is almost unimaginable. But, that’s what Taiz and Taiz’s Flora Unveiled invites us to do. In that book, this eminently botanically-aware duo – one of whom is a co-author of the highly-regarded and widely-used plant biology textbook Plant Physiology and Development  – show in meticulous detail how the realisation that plants engage in sexual congress was painstakingly accumulated over thousands of years to arrive at our present-day acceptance of this as an everyday fact of life.

Flora Unveiled is certainly a book for the botanically-inclined. But it’s much, much more than a plant biology text. Details of the mechanics of plant sex can be gleaned from standard biology texts nowadays, but that’s just the destination. What Flora Unveiled does is take us on a journey of gradual enlightenment from early attempts to probe the sexuality of plants to show how we came to accept the fact that plants have sex. To achieve this feat, the scope of Flora Unveiled extends from the Upper Palaeolithic (c. 40,000 years ago) to the post-Darwinian 20th century. Along the way it has a great deal to say about religions, archaeology, ancient history, philosophy and the influential Greek philosophers, the one-sex model of plants, the development of agriculture, the practice of science, the importance of plant hybrids, the central role of microscopy and the far-sightedness genius of the otherwise short-sighted Wilhelm Hofmeister in discovering plant’s all-important alternation of generations, and the important 19th century’s contributions of Charles Darwin and Gregor Mendel to a true appreciation of the relevance of plant sex. Flora Unveiled is a remarkable book of great vision, reach and accomplishment.

With such tremendous breadth of scope, and drawing upon so many different subject areas, Flora Unveiled is not the easiest of reads; you do have to work at it to get the most out of it. But, to persist is to be richly rewarded with a tale that has many twists and turns and which is reminiscent of a modern-day detective story. And that is probably the way to think of Flora Unveiled – as a forensic piecing together of evidence that led to the unavoidable, indisputable confirmation that plants have sex. This is a story I was barely aware of: It’s all too easy to think that today’s commonplace facts arrived spontaneously, fully-formed overnight. But that is not the case. And, to be reminded of the difficult birth of the concept of plant sexual reproduction, is to be made aware of the cumulative nature of scientific knowledge – which sobering reminder does us all good. It’s also a cautionary tale that lays bare the blinkered attitudes of some of the world’s most famous plant scientists and philosophers who oftentimes twisted facts to accord with their own preconceived ideas. In particular, it tells of adherence to incorrect notions by some of the greatest scientists of times past – even those who can in other regards be remarkable perceptive and insightful and co-found such ground-breaking concepts as the Cell Theory(!). Still, scientists are only human, and it’s not always easy being objective and dispassionate (especially when and where sex is concerned…).

Flora Unveiled is not only a scholarly work of great erudition, it is a true labour of love, and deserves to be read by all (not just the plant-minded). The authors are to be congratulated in giving us such an accomplished botanical detective story.