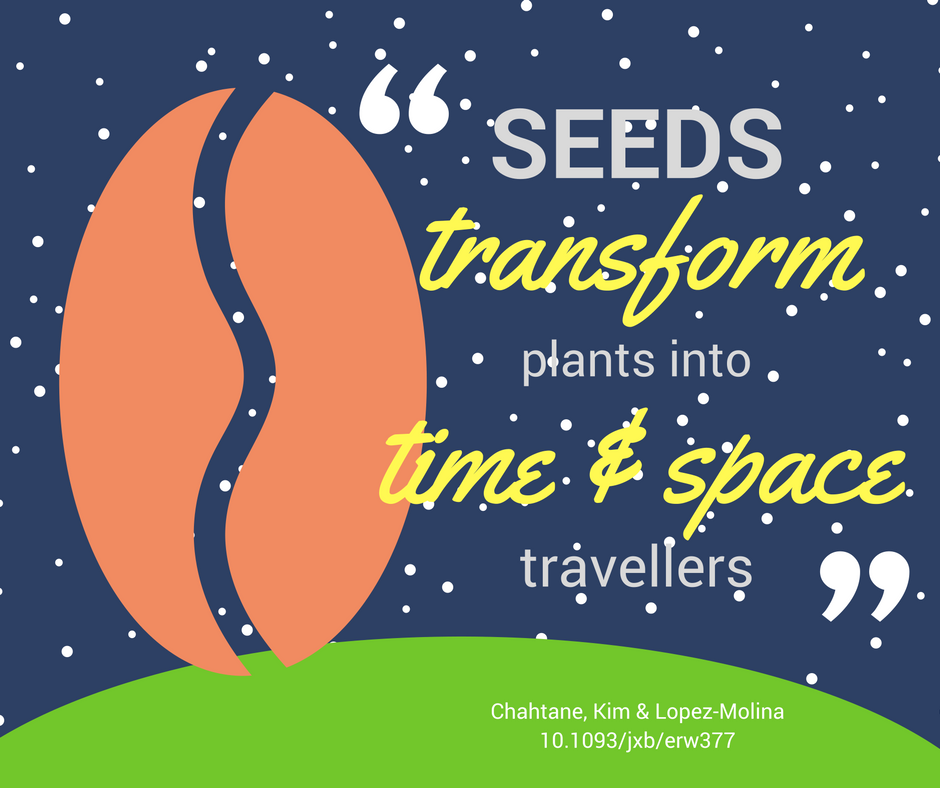 You can’t just plant a seed and expect it to grow. Chahtane et al. have recently published a review in the Journal of Experimental Botany (JXB) “Primary seed dormancy: a temporally multilayered riddle waiting to be unlocked” where they look into the period between ripening and germination. Obviously, this is going to rely a lot on Arabidopsis studies, but seed dormancy is a critical issue for the survival of plant species around the world.

It’s not surprising that seeds don’t simply germinate, no matter what. If they drop into an environment that simply isn’t suitable, for example, it’s too dry or the seed hasn’t been buried properly, then it makes no sense to germinate. It’s better to keep the outside world away from the embryo and wait to see if conditions improve. This isn’t Primary Seed Dormancy. Primary Seed Dormancy is when the seed blocks germination, even when the conditions are entirely suitable. Postma et al. investigated this in Italy and Sweden looking at the germination of locally adapted Arabidopsis there.

Chahtane et al.‘s paper has explained to me why examining primary seed dormancy isn’t entirely straightforward. In some ways, it should be. They point out that primary seed dormancy builds up in the seed due to environmental factors. All the resistance then leaves after ripening, possibly through oxidation. Where I struggled a little is where Chahtane et al. describe dormancy as a potential property. Surely there’s resistance or there isn’t? So it took me a little while to understand why Chahtane et al. are right to highlight it’s a potential property.

To study primary seed dormancy, you can’t simply look at the processes in a seed that isn’t germinating. If a seed doesn’t have the right conditions to germinate then it’s not exhibiting primary seed dormancy. The only way to observe it is to put a seed in a situation where it could potentially germinate, and see what happens. If nothing happens you then have to look at what is blocking germination in a seed that should be germinating but isn’t.

The reason that it came up in my alerts is that this is a phenomenon that has been looked at in a few Annals papers. I mentioned Postma et al. above, Chahtane et al. cite Huang et al.’s Annals paper from 2014, “The effect of temperature on reproduction in the summer and winter annual Arabidopsis thaliana ecotypes Bur and Cvi”. Obviously, soil temperature is important in Chahtane et al.‘s review, but they also cover plenty of other factors such as nitrate.

However, while we can study the effects of what we do outside the seed, Chahtane et al. point out that we still know very little about the mechanisms that operate inside the seed at the molecular genetic level. If we knew in what way the seed was responding then that could allow more sophisticated experiments with environmental cues for germination.

Primary Seed Dormancy is going to remain an area of productive study for quite a while. The puzzle is interesting enough itself, but knowing more about how plants emerge from the seed bank has obvious implications for ecology and agriculture. Given that the environmental cues are going to change increasingly rapidly over the next century, it’s information that has immediate value.